Although the overall situation in Asia in 2021, compared to 2020, has improved with regards to the number of reported incidents related to piracy and robbery on ships, there have been a continued increase of incidents in the Singapore Straits (SS), accounting for more than half of the incidents in Asia last year with 49 reported attacks.

2022 (as of today) has already chalked up 20 reported incidents (19 attacks and 1 attempted) in the CAT3 and CAT4 categories of incidents. 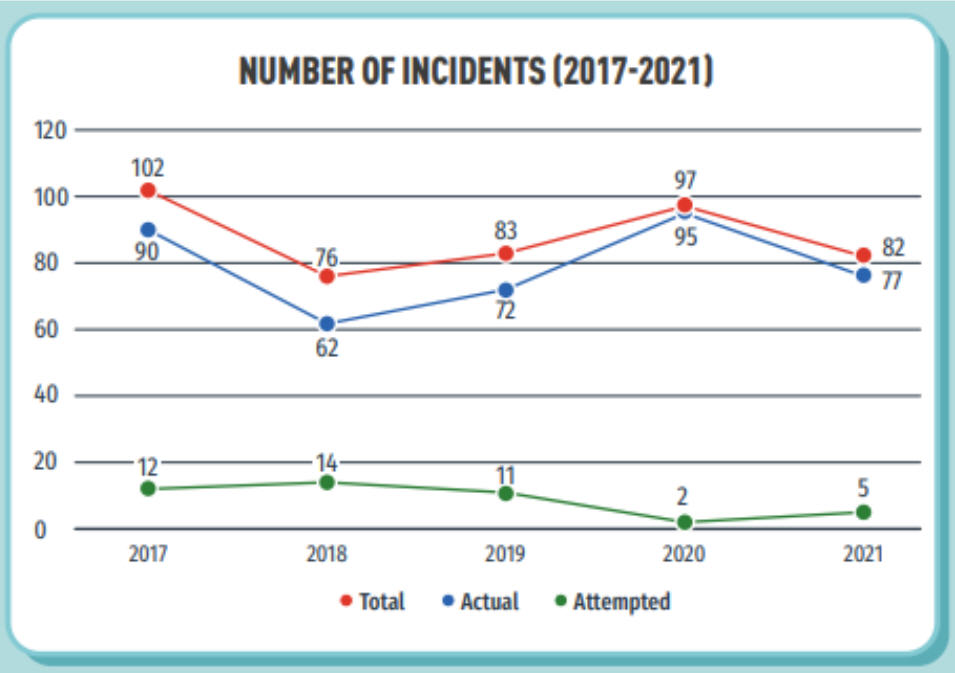 The current threats in Asia, at the time of this publication, are armed robbery and theft along the eastbound lane of the SS and at some ports and anchorages, as well as abduction of crew for ransom off Eastern Sabah (Malaysia) and in the Sulu-Celebes Seas (Philippines). While there are no reported abduction incidents since January 2020, and no crew currently being held in captivity by the Abu Sayyaf Group (ASG), the threat remains high particularly in the areas of Sulu and nearby waters off Tawi-Tawi, as one of the ASG Commanders is still at large.

The recent attacks on 2 March which occurred off Nongsa Point, Batam Island (Indonesia) involved armed perpetrators in all three incidents. There also remains concern with regards to potential incidents at anchorage in Manila, Philippines which saw a rise in incidents in 2021 (9 attacks) involving poor treatment of crew with several incidents including violence against the crew.

Since the establishment of the ReCAAP ISC in 2006, the locations and modus operandi of piracy and armed robbery against ships in Asia have evolved. In 2020, most of the incidents occurred on board ships while underway in the SS (primarily in the eastbound lane of the Traffic Separation Scheme [TSS]), and on board ships berthed/anchored in Bangladesh, India, Indonesia, the Philippines and Vietnam. In 2021, incidents continued to occur in the SS, while the number of incidents in the other locations in Asia has decreased.

During 2014 and 2015, the incidents of oil cargo theft committed by organised criminal groups occurred mostly in the southern region of the South China Sea and in the Malacca Strait. Although there has been no report of such incidents since 2016, the risk remains.

On 4 March, ReCAAP published Version 2 of their "Regional Guide 2 To Counter Piracy and Armed Robbery Against Ships in Asia".

This Regional Guide (Version 2) includes updated information such as the modus operandi for the different types of perpetrators and contact details of the relevant agencies. It is designed to assist the shipowners and crew operating in Asia with suitable recommendations to avoid, deter or delay attacks and unauthorised boardings. The guide complements information provided by the IMO, particularly the reporting of incidents to the nearest coastal State and flag State as stipulated in the MSC.1 Circular 1333/Rev.1 and MSC.1/Circular 1334. The Guide should also be read with the latest information and updates from the ReCAAP ISC, Information Fusion Centre (IFC) and the International Maritime Bureau (IMB).