As set out in our Circular dated 25 November 2016 the Association has come across various claims arising out of soybeans with excessive moisture content being loaded in Brazil and discharged in China.

This circular aims to provide an update on loading/storage conditions at Brazilian ports, especially in Santos and Paranagua, and also ports in Argentina.

Delay in transportation to northern ports of Brazil, Santarem and Itaxoatiara

Significant delay due to heavy rain has been experienced for cargoes transported on the route from Cuiaba (State of Mato Grosso) to Santarem (State of Para) on highway BR-163. This is from the center of soy plantations in Mato Grosso to the border of the state of Para. The highway is tarmac but some 1,000 km to the northern port of Santarem on the Amazon River the highway is in a very bad state, especially during heavy rain periods. Many trucks got stuck in the mud and soybeans were transported back to the southern/southeastern ports of Santos and Paranagua.

Storage conditions at Santos and Paranagua

Soybeans are transported from farms to warehouses in Santos and Paranagua by trucks and railcars where the cargo is covered with heavy tarpaulins. Loading in these ports is done by means of shiploaders, supplied by conveyor belts from warehouses. All the cargo is stored in warehouses instead of in open yards. 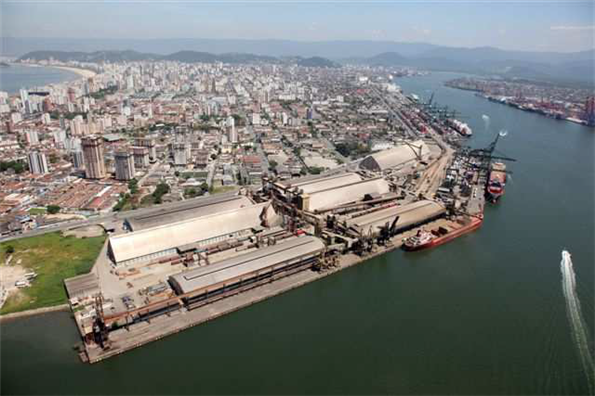 Image of Terminal ADM-39 at Santos, where grains are loaded

In the last sowing season several provinces of the country experienced heavy rains (for example, relevant areas of Buenos Aires / Santa Fe / Córdoba). Some crop areas were affected by flooding, especially soya and maize which have been harvested or will be harvested soon.

After the harvest there can be different scenarios for the subsequent storage:

Generally, both in Brazil and Argentina, before loading the soybeans are stored in warehouses. However, for both transportation and harvest in excessive rain, soybeans could be stored in open conditions thereby exposing them to high moisture. Whilst the dryers could decrease the level of moisture to allow stable transit, there is no guarantee that this will avoid all extra moisture. Soybeans with excessive moisture content loaded on board the vessel may self-heat and claims for discoloration, mouldy and burnt cargo could arise at the discharge port.

However, we remind members that whether such argument would stand is subject to the local law of the discharge port. Members are referred to our circular, see attached link.

The Association has checked with the local correspondent in Brazil who advised that that it would be possible to appoint a surveyor to take samples during loading and to have the cargo analyzed for moisture content. The result could be obtained on the same day. In order to mitigate the risk of claims we would recommend such surveys to be conducted.

Given that Brazil and Argentina allow for loading soybeans with a maximum moisture content of 14%, and where there is a significant risk that even cargo with a moisture content over 12% may overheat and damage may occur, members may wish to consider inserting a protective clause in the charterparty. The Association is ready to assist members in drafting such clause.

The Association is grateful to Brazil P&I and Pandi Liquidadores S.R.L. for contributing to this article.