Overweight containers are a serious issue for the industry, impacting crew, vessel and cargo safety. While IMO changes will not come in to effect until 2016, members will need to continue to act prudently with respect to this risk.

Following repeat concerns with respect to containers having been found to be overweight while being transported on roads in the country and over bridges, the Vietnamese Government enacted a new law in 2014 which limited the total weight of 20 and 40 feet boxes to no more than 20 metric tonnes, including the weight of the container itself.

Weighbridges have been installed at highways and bridges to monitor weights of containers for the purpose of enforcement of the new law. Containers found to violate the weight limits may lead to fines for the trucks carrying them.

Early indications are that there is a rigorous enforcement of the new rules, but it is important to note that the law does not apply to the actual shipment of the containers on board vessels.

In other words, Vietnam does not prescribe a maximum weight for containers for shipment on vessels, only for road transport purposes.

Hot Tip: Members should not assume that as a result of this new law, containers offered for shipment do not exceed 20 m.t. in weight.

The Association has previously advised on the new SOLAS amendments which will come in to force in 2016.

In the meantime, vessels should (despite the known time pressures) seek to ensure they have proper cargo declarations and manifests supplied in advance of loading so that it can be planned and executed safely. That means ensuring both weights, and contents, are duly declared and taken in to account when the stowage plan is prepared and reviewed.

Where vessels are seriously concerned about the safety of a particular box, it may be better - despite the risk of a dispute - not to load it and instead proceed with completing operations with the remainder of the scheduled cargo.

While an argument may ensue about the non-shipment of the box, given the need to get on with the job of shipping the rest of the load, this is the safer route to take.

Should there be a serious concern over more than one box, i.e.: a wider issue with a stowage plan proposed by shippers or issues arise during the cargo operation which give rise to safety concerns, then again it may be better to take the necessary remedial action there an then. Once a vessel is on the high seas it will not be become very difficult to deal with an overloaded stack that is in danger of collapsing (or has indeed collapsed). Given the time pressures and volume of cargo, masters and chief officers need good shore side support to enable them to check that the job is done properly and safely.

In case of urgent concerns, masters should not hesitate to contact the Association's local correspondents.

The Association is grateful to correspondents Total Marine Claims and SPICA Vietnam for their assistance with this update. 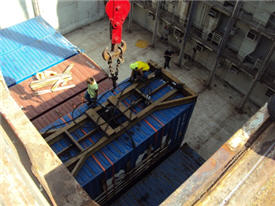