The Association has been alerted to the risk of possible liquefaction of cargoes of bauxite that may originate from Malaysia and Indonesia. Members are advised to urgently consider this issue if they are fixed or are planning to fix a vessel for such a voyage.

Prepared with the Assistance of Brookes Bell.

Is bauxite cargo at risk of liquefaction?

There has been some debate on this issue, not least because bauxite cargo may come with a particle constituency of varying sizes and dimensions which could see cargoes be a mixture of fine particles, smaller particles as well as lumps and rocks.

Under the IMSBC Code the cargo has been described as Category "C", neither prone to liquefaction (Category "A") nor possessing a chemical hazard (Category "B").

In practice, however, the Association has had experience of shipments of bauxite which appeared to show signs of liquefaction and indeed expert advice on the issue would suggest that depending on the composition of the cargo, it is possible for liquefaction to occur.

Particularly this may be the case where the cargo is pre-filtered to separate fine and large particles, water may be introduced in to the cargo in this process and / or the cargo has undergone some other form of partial processing / crushing.

Depending on the particular circumstances of any given shipment, it would appear that bauxite may come with the risk of liquefaction.

As such it may not be safe to assume that simply because a cargo has been declared by the shippers to be Category "C", that in fact it is. 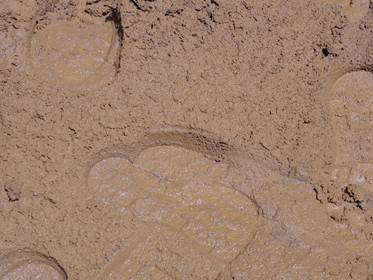 Under the Code, bauxite is stated to be a Category "C" cargo, with the following cargo composition:

When the cargo consists of such a particle size and distribution - with over 2/3 majority of the cargo being in the form of lumps - the IMSBC Code would appear to state that the cargo is not prone to the risk of liquefaction. That may not be a safe assumption to make.

Further it should not be read that all bauxite is in fact Category "C", as actual composition and moisture content will impact the risk of liquefaction.

For instance, a reading of the Code may suggest that a cargo with 70% of particles ranging from 2.5 to 10 mm and 30% powdered cargo with particles sizes under 2.5 mm would not fall within Category "A" and would not come with a liquefaction risk.

The expert advice received is that such a cargo composition could, depending on moisture content, in fact display signs of being prone to liquefaction and thus act like a Category "A" cargo, i.e.: be prone to liquefy.

In this regard it needs to be kept in mind that the IMSBC Code states that any fine grain material containing moisture may potentially display flow characteristics and thus should be tested. To which see Appendix 3, Section 2.1 at Page 366 of the 2013 edition. To quote:

"2. Cargoes which may liquefy

2.1 Many fine-particled cargoes, if possessing a sufficiently high moisture content, are liable to flow.
Thus any damp or wet cargo containing a proportion of fine particles should be tested for flow
characteristics prior to loading."

Where the cargo is of a different composition as stated in the Code, particularly with a greater amount of fine particles, then there should be no doubt, however, as to the potential risks and the likely situation that the cargo may in fact qualify as a Category "A" cargo.

The Association understands that for some shipments cargo may be pre-filtered to take out particles and lumps above 100 mm in size. Furthermore larger particles may be subject to crushing to reduce the size of the particles.

The reason for this is that cargo receivers may have a preference to receive smaller particle cargo.

In itself that may not be an issue, assuming the cargo is sufficiently dry and in any event has a moisture content below the Transportable Moisture Limit (the "TML") which is of course a figure at 90% of the Flow Moisture Point (the "FMP").

These figures can be derived by taking samples and having them tested at a suitable laboratory (one which is equipped and experienced for this task).

It would appear, however, that cargoes may not only be subject to significant water introduction by way of rain fall, but that the process of filtering the cargo may involve the use of significant quantities of water under pressure. 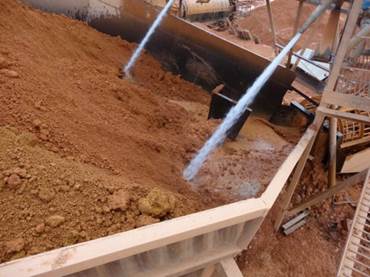 If cargo is pre-filtered and or crushed to contain smaller particles, fines and powder as well as subjected to large intakes of water (be it by way of rainfall, high pressure hoses or other) then it would change the nature of the cargo as described in the IMSBC and thus give rise to the risk that it may liquefy.

In such circumstances, the cargo needs to be considered as a Category "A" cargo, i.e.: one which is prone to liquefy.

A by-product of the processing of bauxite in to aluminium is so called "red mud".

Given the composition of bauxite, the red mud produced contains a lot of iron oxides (up to 60%) and thus becomes of potential interest as an iron source cargo in itself.

It is, however, a cargo that comes with two significant risks: 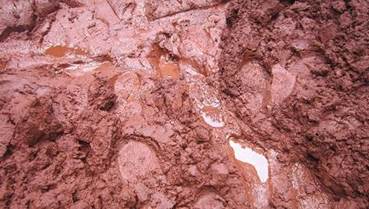 Members need to consider very carefully before loading such a cargo given that it may present significant risks to crew and vessel.

In particular it has been noted that such cargo has been shipped from Asian sources, but described as "iron oxide" or "iron ore" and declared as Category "C" in shipment documentation.

Such description and categorisation are not correct, and ships should not load cargoes without proper and correct cargo documentation being provided in advance.

The Association has repeatedly warned about the risks of liquefaction that come with the carriage of bulk mineral ore cargoes.

This risk can arise from cargoes that may at present be described as Category "C" in the IMSBC, particularly where the cargo actually tendered for loading is of a different composition than that described in the IMSBC.

The advice to members must therefore be as follows:

In addition, the Association previously warned about possible risks of liquefaction in relation to bauxite cargoes, see attached link.

The Association has previously published detailed advices on liquefaction risks, and a dedicated section with resources is available.

This includes the Pocket Guide to Liquefaction produced in co-operation with Brookes Bell.

Should members have a specific vessel query, they are asked to contact their usual Skuld business unit.

For further information members are asked to contact the Association.