The sanctions against Iran have recently been eased, and a number of companies and contractors are looking towards opportunities there. However, this is in many ways a step into the unknown for many, with the market having been closed for so long. In this article, Vishal Khosla of Skuld London and Lewis McDonald of Skuld Offshore look at recent developments in Iran, identify areas shipowners and contractors should look out for and provide an overview of the legal system

The easing of sanctions on Iran looks set to have a profound effect on its oil and gas industry. Earlier this year the UN and EU rolled back many of the restrictions they previously imposed and the US also lifted secondary sanctions involving non-US persons. The unfreezing of Iranian funds in the banking system and removal of over 400 Iranian businessmen and politicians from the sanctions list has assisted, at least in part, in restoring the confidence of non-US investors in operations in the region. Once they have satisfied themselves that they do not fall foul of any remaining sanctions legislation, investors can now seriously consider offering their skills and expertise to the industry.

At a time when most players in the offshore industry are seriously hurting, re-emergence of the Iranian offshore industry comes at an opportune time. According to a recent report by an internationally recognized energy intelligence group, it has been estimated that Iran could award approximately USD 50 billion to the offshore sector between 2016 and 2020. The majority of this investment is expected to be towards engineering, procurement, construction and installation contracts.

With the increase in the number of active platforms along with ageing facilities that are understood to have suffered from lack of investment since the main players pulled out of the country on the imposition of the sanctions, there is great potential for a rise in maintenance and operations purchases.

This potential appears borne out by reported projects such as the order of 5 jack-up rigs from a Russian shipyard and Total having signed an 'agreement in principle' to help develop the South Pars field alongside the Chinese state oil company CNPC, which is said to be worth about USD 2 billion. Furthermore, there has been cooperation with a South Korean company over development of the Balal field and discussions taking place for a floating LNG facility to be used for gas liquefaction in the Persian Gulf. More platforms are expected at the USD 4 billion ENI project South Pars phase 11 as well as at Farzad B discovered by an Indian consortium.

What the future holds

While a speedy return to pre-sanctions supply levels might cause unwanted stock-building, the expectation is that Iran's gradually increasing production capabilities will balance out reduced output from other oil producing nations currently looking to cut costs.

These developments are very welcome and must be seen as a shining bright light in an otherwise gloomy period in the offshore industry. To what extent development in this region will contribute to the wider offshore sector remains to be seen but the not unreasonable assumption is that unlocking one of the largest energy reserves in the world would result in numerous employment opportunities.

Remaining sanctions and precautions for vessel owners and charterers

While this resurgence is favourable news for the industry, it is important that every company looking to conduct business with an Iranian entity bears in mind some key sanctions issues that might affect them:

Accordingly, we would advise our assureds to carefully consider the remaining risks involved when conducting business in the region and to ensure that they are satisfied that they are not in breach of the remaining sanctions legislation before making any commercial commitments.

Below are some basic questions that might help identify potential sanctions issues (pdf version).

Skuld has a network of local correspondents located throughout the globe and this also applies to Iran. If members encounter any difficulties while trading to Iran, or any other port, contact details for the local correspondent can be found here.

Our local correspondents in Iran are on the vendor list of most major Iranian Offshore Oil and Gas companies and, as a result, they are fully familiar with the offshore fields and the way they operate. This will assist greatly to achieve prompt access as and when required. Having knowledge of the local offshore operations should mean that a suitable surveyor for a specific job at hand should be available at short notice.

Current status of ports and terminals

While there are no general warnings concerning the operation of Iranian ports, our local correspondents will be happy to look into specific enquiries in relation to a particular port or terminal or offshore site/location. However, one port and terminal operator, Tidewater Middle East, remains on both the US and EU lists of sanctioned entities.

It is reported that regular shipping ports and terminals are operating at an acceptable level and that shipping traffic is gradually increasing following the lifting of secondary sanctions.

As far as offshore installations are concerned, no doubt a number of sites will be located in relatively unfamiliar territory. In such cases local expertise would be extremely helpful in identifying any specific issues that an operator might face.

Every offshore region has its own unique contracting challenges, with which contractors become familiar over time. However, when a new region opens, contractors may be faced with a degree of uncertainty in relation to their exposures under the new agreements which are rolled out. Iran facts(1) 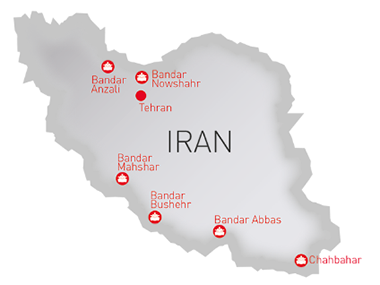 With opportunities now emerging in Iran following the lifting of sanctions, many contractors will be turning their attention there, so, in advance of that, we offer some general contracting tips from a P&I perspective:

As ever, Skuld Offshore is happy to review our assureds' contracts and to provide bespoke advice in relation to the P&I risks set out under the contract. For further details, feel free to contact a member of the Skuld Offshore team.

The Iranian legal system – an overview

The Iranian legal system is a civil legal system, built upon a constitution, legal codes (such as the civil, commercial, criminal and procedural codes) and substantive laws. The constitution ranks highest, followed by statutes and then government decrees.

In addition, while Sharia law is not a mandatory source of law, it has a significant impact upon it as all civil, penal, financial, economic, cultural, military, political and other laws and regulations must be based on Islamic criteria.

The Iranian court system is divided into three tiers, all of which fall under the remit of the judiciary: 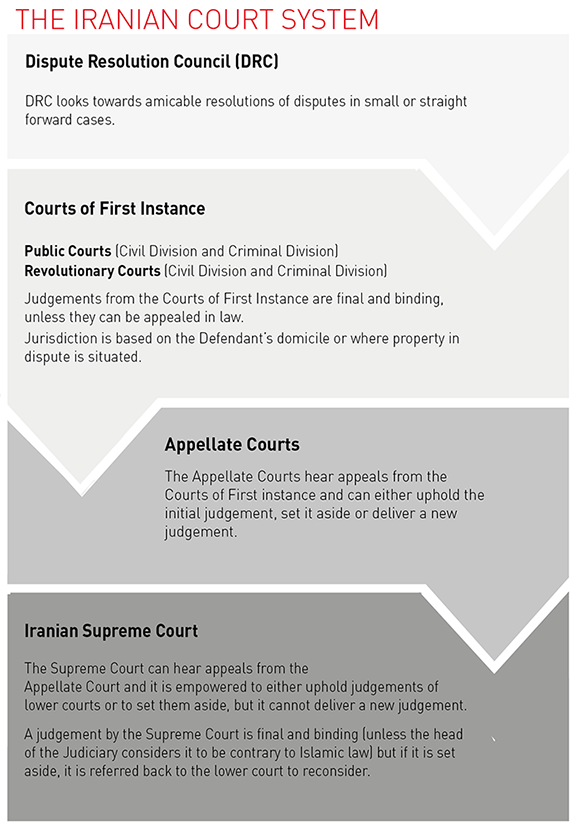 The Iranian Civil Procedure Code also allows parties to use alternative methods of dispute resolution such as negotiation, conciliation, arbitration and mediation. Of these, only arbitration is commonly used in commercial matters.