When a serious incident occurs offshore, parties are subject to a number of different pressures from different sides. Depending on where the incident arises, those pressures may be different and the response required may vary.

In this issue of The Field, Pamela Milgrim of Skuld North America, with the assistance of law firms Phelps Dunbar and Wikborg Rein, looks at the differences in emergency response between two highly developed regulatory regimes – the USA and the UK – and how Skuld Offshore can help.

In the United States, Owners face many issues when governmental agencies investigate a serious marine casualty. The primary investigative agencies are the United States Coast Guard (USCG) and the National Transportation Safety Board (NTSB). In situations where offshore oil development on the Outer Continental Shelf involving mobile offshore drilling and similar units are concerned, the United States Bureau of Safety and Environmental Enforcement (BSEE), a division of the Department of the Interior, may conduct a joint investigation.

All Owners should have an emergency response plan that addresses how to respond to a USCG or BSEE investigation, care for its crewmembers, preserve evidence, and deal with public relations.

Under USCG regulations, if necessary, Owners can ask to be designated as a "party in interest" so that they can formally participate in the investigation and any subsequent hearing. This is done by sending a letter to the USCG. Typically, however, Owners' initial concern will be to ensure that they have an adequate team to mobilize immediately to the vessel because the first action USCG takes is to send its marine investigators – the so called "blue suits" – to examine vessel documents and interview the crew as a part of a civil investigation. Where BSEE is involved due to offshore drilling operations, they will coordinate their investigation with USCG but have separate investigatory personnel. In a serious marine casualty, Owners' team should include legal counsel in order to manage the crew interviews.

Owners' next concern will be to try to understand whether the civil investigation by USCG or BSEE could become a criminal investigation. Ordinarily, both conduct what are known as "parallel investigations" and in this situation, if investigators find evidence of a crime, they will turn this information over to the criminal division. Critically, a crewmember may be unaware of the parallel investigation and that their evidence may be handed over to prosecutors. In addition, they may be unaware that for criminal proceedings they have a right not to be interviewed and also a right to legal counsel. On the other hand, Owners do not have a right against self-incrimination and have a duty to cooperate with the civil investigation.

It is important to note that both the "blue suits" and BSEE investigators are trained to not advise crewmembers of the possibility of a criminal investigation and/or their legal rights. As a result, a crewmember who thinks they are cooperating with the authorities by giving their version of the incident may unwittingly be providing evidence that will be used against them in criminal proceedings. In addition, while on the vessel, the investigator may ask Owners' legal counsel whether they represent Owners or the crewmember in an effort to create a divide and to try to prevent Owners' legal counsel from controlling the interview and/or advising the crewmember not to speak.

Co-operation with the authorities

As a result, at the earliest stages of a USCG or BSEE civil investigation, Owners are faced with a difficult situation and the level of cooperation they give to the authorities should be determined on a case-by-case basis, in consultation with legal counsel. If there is any risk of a criminal investigation, such as for a pollution event or casualty involving death or serious injury to one or more crewmembers, Owners should consider retaining separate criminal counsel for the company and its employees. The civil and criminal legal counsel can then work together as a team in both Owners' and the crewmember's best interests. As a rule of thumb, it is probably prudent to assume that parallel investigations will always be conducted.

Following its initial investigation, USCG or BSEE may simply study the evidence and issue its investigation report or, depending upon the severity, it may also hold a public hearing. In addition, NTSB may also conduct independent investigations of all major accidents involving any mode of transportation. Unlike USCG or BSEE, NTSB does not investigate criminal activity but it does have authority to hold public hearings to gather sworn testimony and to allow the public to observe the progress of the investigation. Thereafter, NTSB will issue a report.

Finally, when a serious casualty occurs which causes Owners to face the risk of both civil and criminal liability, it will become necessary for Owners to consider an overall settlement strategy towards the Government to resolve both civil and criminal aspects. In certain cases, Owners may seek a stay of any civil litigation to allow the criminal actions to proceed. This can help to avoid any problems with crewmembers being unwilling to testify for Owners' because they are concerned that they risk criminal prosecution – US courts understand an individual's right against self-incrimination and how that affects civil litigation and can react accordingly. The US court may also seal civil testimony until any criminal investigation is resolved.

In the UK, those who operate drilling or production assets are termed 'duty holders'. This reflects their obligation to have in place the organisation and procedures to deal with an emergency and to effect an evacuation. However, in reality in the event of a true emergency assistance will be required from the UK's national assets and resources. In these circumstances, the duty holder's main role is to support the offshore installation manager from its emergency control room ashore.

Search and rescue operations are the role of HM Coastguard, a government body. The police will co-ordinate the shore based response, including documenting the landing ashore of personnel, advising next of kin and establishing a media briefing centre. The police also have criminal jurisdiction over offshore installations and will decide whether to refer the matter to the public prosecutor, who will take criminal action if warranted.

In the event of an accident where there may be significant pollution, the Secretary of State's Representative (SOSREP) also has the power to intervene if he considers it is urgently needed. The scope of SOSREP's powers in relation to the offshore industry includes ordering parties to take or refrain from taking any action of any kind whatsoever, including moving the installation, unloading any oil, taking over control of the installation and sinking or destroying all or part of it.

The Health & Safety Executive (HSE) investigates land based and offshore accidents and incidents. HSE is responsible for the inspection and regulation of occupational health and safety and major hazard risks associated with 'work' activities including the offshore oil and gas industry. Their jurisdiction extends to the territorial sea, out to 12 nautical miles, and to certain "designated areas" defined by law. It also applies to individuals who are not British subjects and corporate bodies not incorporated in the UK.

Accidents and incidents related to ships and crew are investigated by the Maritime and Coastguard Agency (MCA) and the Marine Accident Investigation Branch (MAIB). MCA investigates incidents involving ships to determine whether a significant breach of regulations has occurred and to recommend enforcement action. They also have responsibilities for search and rescue while MAIB's aim is to determine the circumstances and causes of an incident and to make recommendations to prevent their recurrence.

The Health and Safety at Work Act 1974 (HSWA), which applies to offshore installations and connected activities, gives HSE the power to direct investigations and inquiries in the event of "any accident, occurrence, situation or other matter whatsoever which the Executive thinks it is necessary to investigate...". Accordingly, HSE's inspectors have broad powers to investigate incidents, including the power to examine premises or order them to be left undisturbed, take samples and detain any article or substance as long as necessary to allow the inspector to examine and test. The HSE inspectors also have the power to take statements, to inspect and copy records or documents relevant to the investigation, to require necessary assistance and also any other power which is necessary for the purpose of giving effect to the statute. These are stringent powers and failure to comply is an offence.

The HSE cannot, nor do they regard it as necessary to, investigate all incidents. When deciding whether to investigate an incident HSE will consider the scale of the harm, the seriousness of the potential breach and the wider relevance of the event, including serious public concern.

Where there has been a breach of HSE law leading to a work place death, the HSE will refer the matter to the police to investigate. It will thereafter be decided if there will be a prosecution for that death. A coroner's inquest or fatal accident inquiry can follow. The HSE, police, MCA and others work according to "Work related deaths: A protocol for liaison". One authority will have "primacy" but manslaughter and HSE investigations and prosecutions may run side by side. All authorities should take a decision on prosecution as quickly as possible, but in any event within three years of the date of the death.

The effect of these powers and the potential delay before a decision on a prosecution takes place, can in some cases mean that investigations by the operator and its insurers and lawyers who wish to deal with civil and contractual liabilities can be significantly delayed. Equally, any offshore crew who are involved in the authorities' investigations are unlikely to be able to assist the operators' enquiry until all possibility of criminal charges are exhausted. 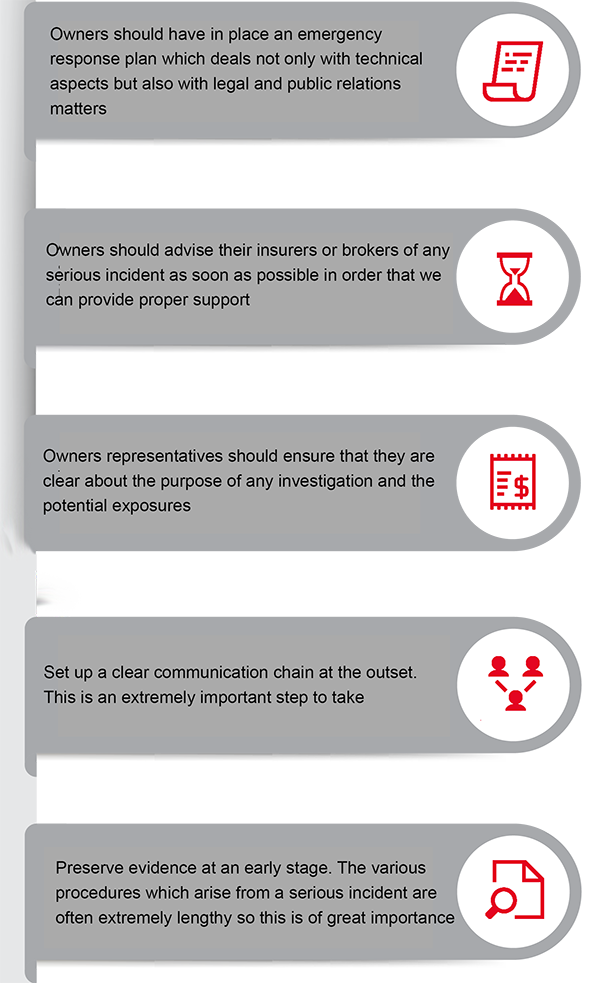 How can Skuld help

When there is a serious incident offshore, there will be a number of conflicting demands for information and investigations and the owners or operators will have to move swiftly to preserve evidence and protect their interests. A fundamental part of that process is to inform the club, and other relevant insurers, as soon as practicable after the incident.

While many assureds will have sophisticated response plans in place, and experience in dealing with matters such as these, that may not be universal. The knowledge and history of dealing with major events that the club is able to bring to bear is considerable, whether it be in simply providing advice as to appropriate experts or simply through to being involved in the management of the response.

Setting off on the correct footing is extremely important when dealing with any incident, but in dealing with matters of this nature, the importance of having a support network in place, and having them in place quickly, should not be underestimated or overlooked.

The association is grateful to E. Martin "Marty" McLeod of Phelps Dunbar LLP and Ian Teare, Chris Grieveson and Bård Breda Bjerken of Wikborg Rein for their assistance with this article.